SPRINGVILLE – For Springville-Griffith Institute seniors Kailea Sullivan and Garrett Walker, the next phase in both their athletic and academic careers will soon be a reality. In recognition of their accomplishments on and off the field, coaches, family and fellow S-GI athletes came out to celebrate the athletes as they participated in celebratory signings for their future athletic teams in college. 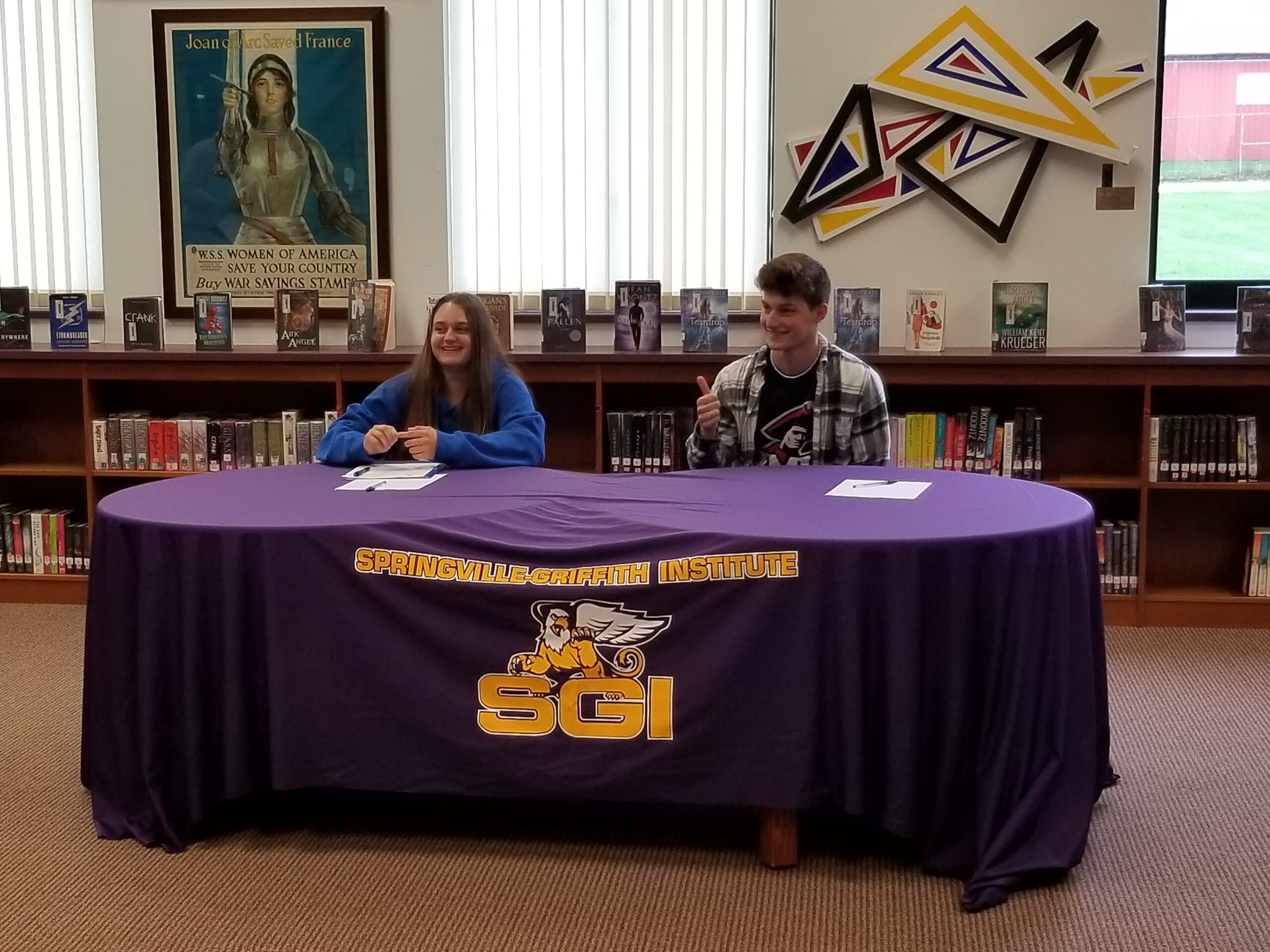 Sullivan will be going to SUNY Fredonia to play volleyball. Sullivan said with her mom and other family members going to Fredonia and not hearing anything negative from them, along with liking her new coach, it helped with her college decision. While enjoying her time playing volleyball at S-GI and helping lead the team to a section title this past year, Sullivan said she is excited to show her skills at the next level. Sullivan will be majoring in exercise science and after Fredonia, will be going to another college to get her doctorate in physical therapy.

“I definitely loved playing with my friends that I had here today with me and I loved the coaches too. They definitely made me feel that I was important and that I contributed a lot,” Sullivan said. “I hope to bring my energy and continue just being super friendly and outgoing.”

While not able to attend the signing event, Athletic Director Joe DeMartino shared a message to Sullivan from S-GI volleyball coach Kristin Hughey, who congratulated Sullivan on her many accomplishments at S-GI and praised her for the work she has put in with the volleyball team.

Kailea Sullivan was joined by friends, family and teammates during the signing.

“I look forward to watching you on the court at Fredonia this fall. The Blue Devils are so lucky to be welcoming you to their team. Your athletic record of outstanding accomplishments speaks for itself, but I know Fredonia doesn’t yet appreciate all the talent they are getting by signing Kailea Sullivan,” Hughey said. “In my many years of coaching, there are very few players who have had as much focus, intensity and passion for the sport as you do. But more than that, your commitment to the team is total and genuine. You’re the player with the best attitude, never complains and whose sense of humor can lift your teammates, can bring them together and get them through anything.”

“It’s really the perfect distance to me from home, it’s three hours away, the school is a good size around 7,500 so it’s not too big or too small, great academics, great facilities, they are very well funded, the hockey is super good and the coach,” Walker said.

Walker played for the Eden-Lake Shore-Pioneer-Springville club hockey team while at S-GI. During the 2021-22 regular season, he had team highs with 17 goals, 16 assists and 33 points in 16 games played. Now moving on to college, Walker will remember his time with his ELPS teammates – including fellow S-GI students Matt Delesandro, Owen Gang and Zac Tatford – and is ready to continue playing at the next level. 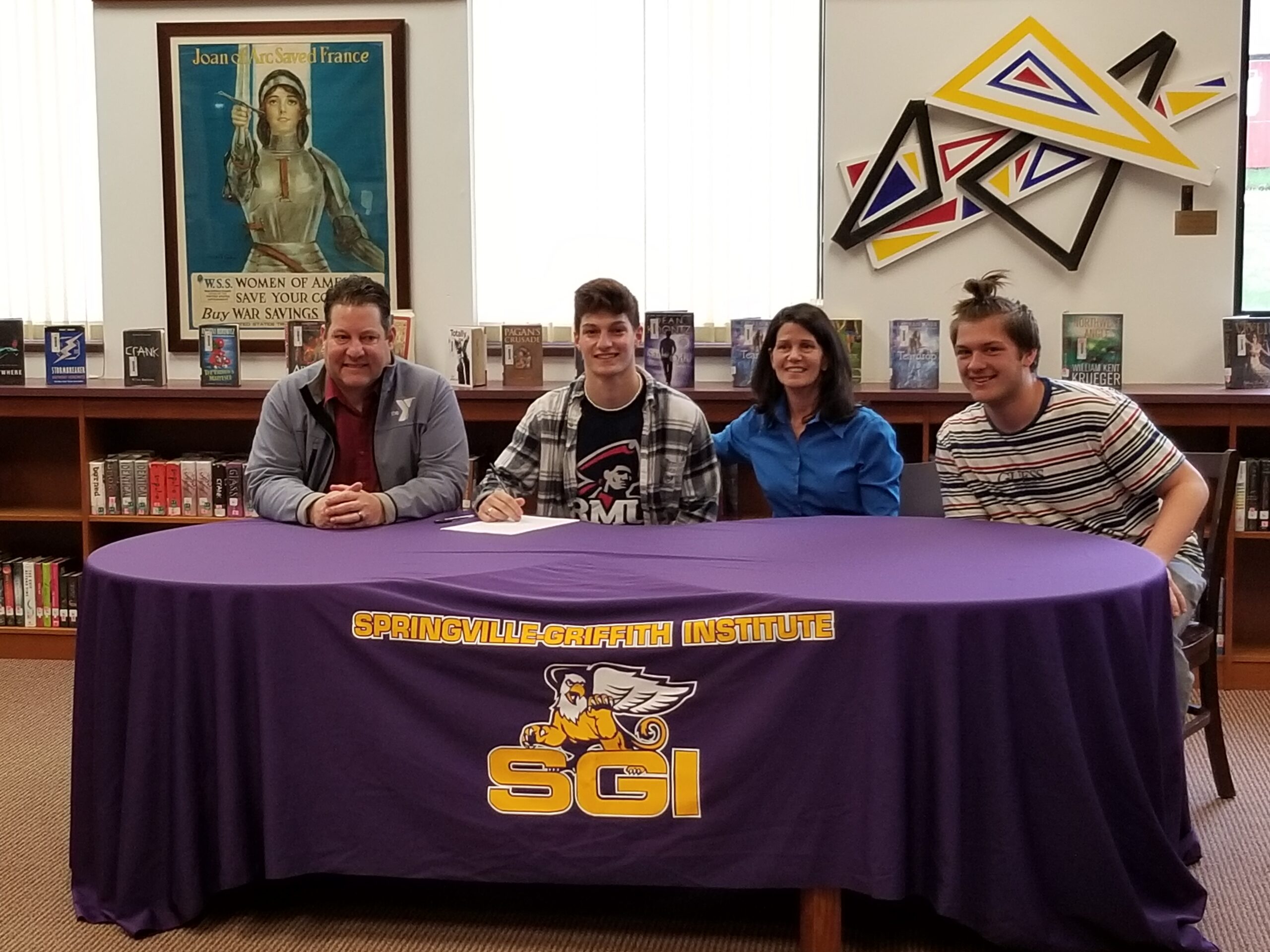 Garrett Walker was joined by family and friends during the celebratory signing.

“My skill set is definitely my work. I’m not the flashiest guy, but I have speed. Short, quick and that is my strength,” Walker said. “Just work ethic, positive attitude and looking out for the team.”

During the signings, S-GI High School Assistant Principal and Athletic Director Joe DeMartino and Superintendent James Bialasik praised the students for their accomplishments on and off the field and the positive ways they will be able to make an impact on their new teams.

“If you know Kailea and Garrett, you know that not only do they excel in the athletic arena, but also excel in academics and we couldn’t be more proud when Garrett goes to Robert Morris University and Kaliea off to Fredonia,” DeMartino said.

“You have to realize what amazing company you are in to be going on to play athletics at the collegiate level. It is such a small percentage of high school athletes that go on to compete at that next level. It really says something about both of you,” Bialasik said. “Not only your ability on the field, on the ice and on the court, your character I think that’s what gets you here. It’s working harder than other people, putting in the time and effort, having the enthusiasm … it’s been great watching you two grow up and I wish you nothing but the best.”