The West Valley softball team took four games last week to improve its win streak to five. The Wildcats took both games of a doubleheader against Franklinville by 16-5 and 20-6 on May 7, with each game going only five innings. West Valley then doubled up on Ellicottville by a 16-8 score on May 9, before rounding out the week with an 11-5 win over visiting Salamanca on May 10. 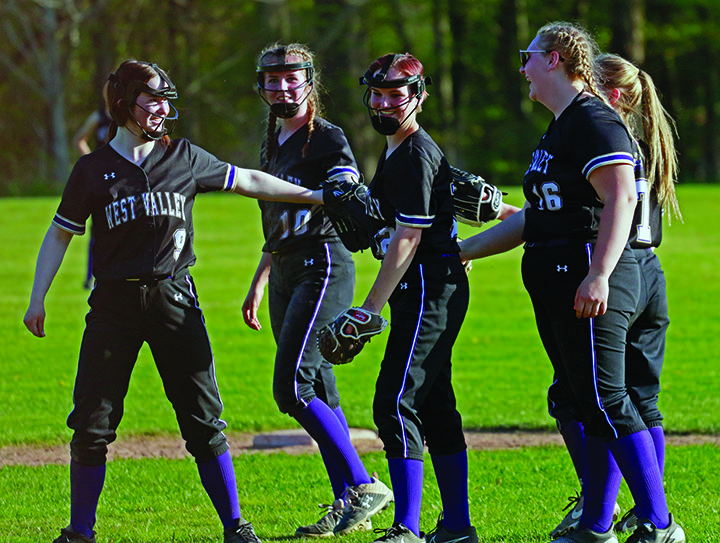 The West Valley infield gathers around pitcher Colleen Keller (center) to start an inning against Salamanca.

“This season the team has really made an effort to grow every time they take the field. This has led to the team being successful and building a strong team. From top to bottom this team really has each other’s back and if one player is struggling, others are stepping-up in the key moments of the game. I am really proud of the way they are pushing themselves to win every pitch,” West Valley head softball coach Bryan Hansen said.

The Wildcats are now 7-3 and in second place of the CCAA East 2 Division and trail leader Portville, who is undefeated in division play with an 8-0 record. The Wildcats are just a half-game ahead of third place Ellicottville, who has a 7-4 division record. During the win streak, four of the five victories have been at home. West Valley entered the week after a 9-6 win against visiting North Collins on April 30. 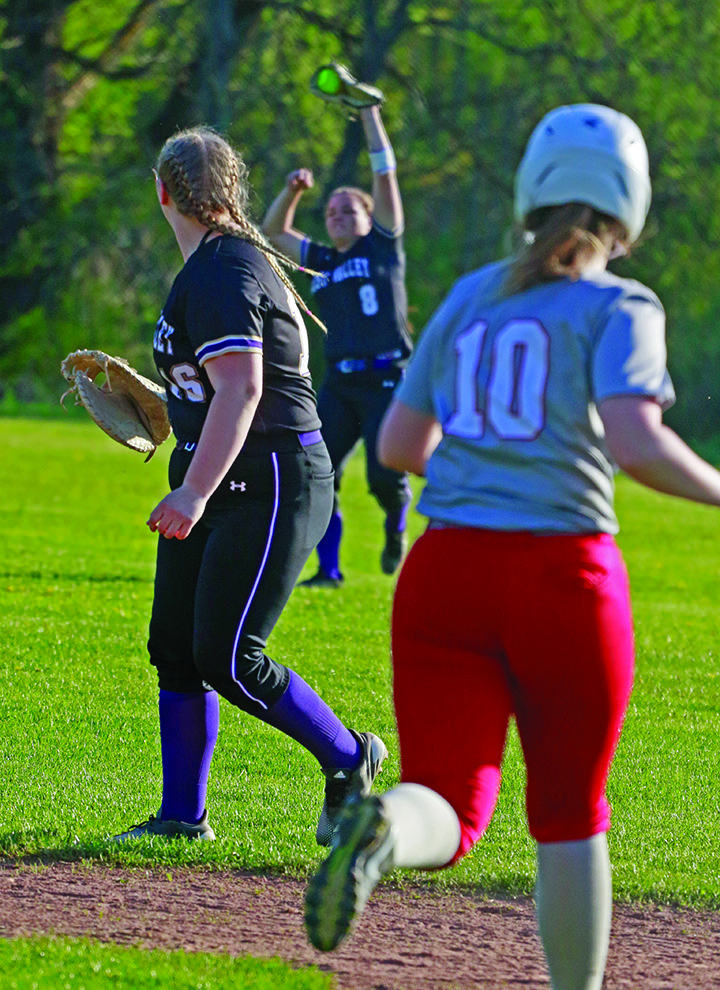 Colleen Keller was the winning pitcher in all four wins last week with three strikeouts in each game. In the first two games against Franklinville, Keller went four innings in each and allowed five hits in both games, giving up five runs in the first game and four runs in the second game. Against Ellicottville, Keller allowed 11 hits and eight runs in seven innings, while in the win against Salamanca, she allowed eight hits and five runs. Throughout the four wins, Keller recorded eight walks collectively.

In the second Franklinville game, the Wildcats recorded 10 hits with a pair each from Ava Bockhahn, Herbst, Stanier and Maggie Parish. One of Herbst’s hits went for extra bases with a double. Singles were recorded by Keller and Blackwell. Stanier finished with three RBI, while Bockhahn, Herbst and Parish each batted-in two runs.

Against Ellicottville, West Valley recorded 12 hits led by three from Bockhahn, including a home run. Herbst had a pair of hits with another double, while Keller and Parish plated two hits apiece. Solo hits came from Blackwell, Stanier and Lauren Frascella. 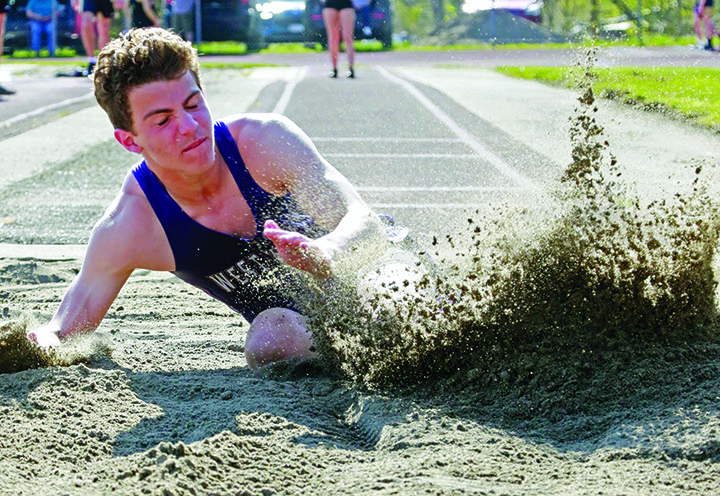 Jack Tharnish hits the sand in the long jump Tuesday.

The win against visiting Salamanca saw the Wildcats notch their third consecutive double-digit hit performance with 11. Keller led the team with three hits and three RBI, including a double and home run. Frascella and DuFrane finished with two hits and two RBI each with both of Frascella’s hits being doubles. Stanier had two hits, while solo hits came from Parish and Herbst, with the latter adding two RBI.

West Valley wraps up the regular season with three games beginning with a road contest at Cattaraugus-Little Valley on May 11, followed by the final home game of the regular season against Portville on May 14, and then a non-division game at Akron on May 16.

The West Valley track teams hosted a tri-meet against visiting Silver Creek-Forestville and Cattaraugus-Little Valley on May 10. It was the first track event hosted by West Valley in seven years. The Wildcat teams participated once in each event with their times and distances against both oppositions. Some first-place finishes ended as second-place finishes, while some second-place finishes had potential to be first, depending on the opposition’s times and distances. 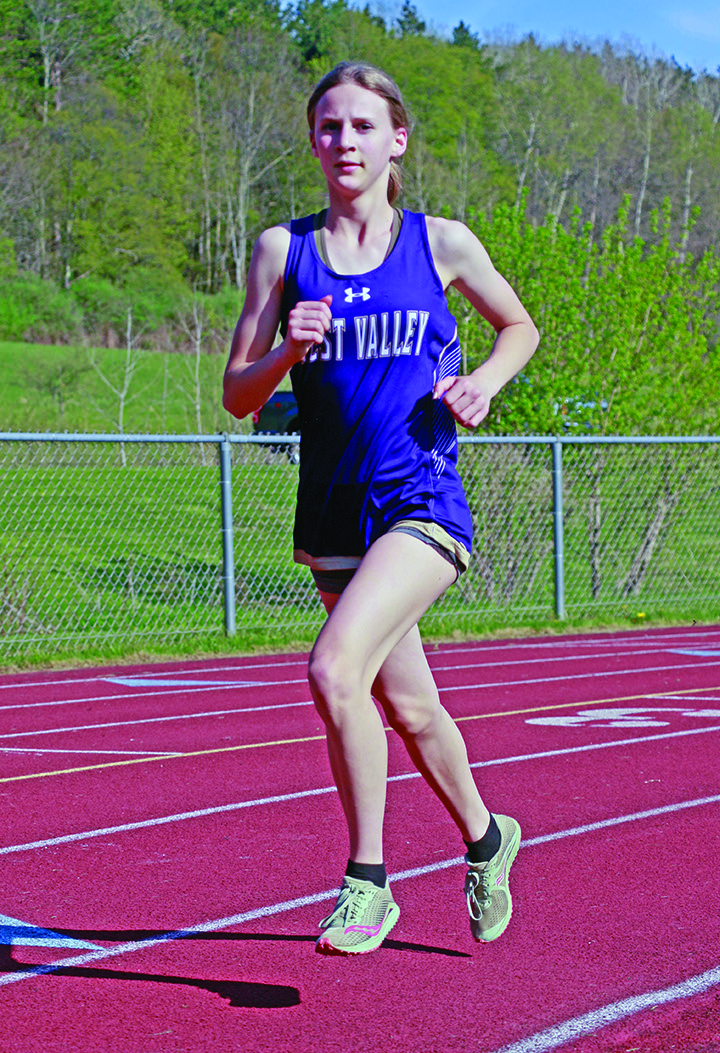 For the West Valley boys team, Jack Tharnish finished with three wins against Silver Creek-Forestville and four against Cattaraugus-Little Valley. Tharnish was first against both oppositions in the 1600-meter run (5:21.9), 3200-meter run (12:19.3) and the triple jump (35 feet), but only first against Cattaraugus-Little Valley (second against Silver Creek-Forestville) in the long jump (16-feet-7.5). Nolan Spencer took first against both oppositions in the shot put (35-feet-2.5) and discus (88-feet-7).

Other first-place finishes came against Cattaraugus-Little Valley by Maggie Parish in the discus (67-feet-2) and Onnalee Caswell in the 400-meter hurdles (1:29.6).

West Valley track next travels to Salamanca for another tri-meet against Cattaraugus-Little Valley and hosts Salamanca on May 17, before finishing the regular season at Randolph on May 26.